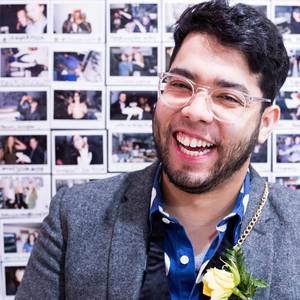 Jonathan is an actor, writer, and filmmaker from Yonkers, NY with a splash of the Bronx. He has studied at the Upright Citizens Brigade, iO, Second City, The Magnet, and has performed all over New York and Chicago.

In Chicago, he is a recent graduate of the Harold Ramis Film School, part of the groups Stir Friday Night, iO's Harold Team Velvet, Pool Team Spoiled Rotten, and digital team Free Trial Run, Breakfast of Champions, Ritmo Lokal by way of Generation Latinx, and a writer on The News With Maggie Smith. He also does shorts with film studio Make it Up Media.

In New York, his Indie Team Room 31, is a three-time winner of Indie Indie Cage Match, has performed at the Del Close Marathon, and hosted a monthly variety show called The Check-In with Room 31 in Brooklyn.

Back in the day, his Sketch Team Skidomedy performed at National College Comedy Festival, Brown University Comedy Conference, and Yale. He also has as a Theater degree! What fun.

He would love to coach your indie team and/or direct your sketch shows, and films! In the past, he's coached in Second City's Coached Ensembles and the 10,000 hours program at iO.

If you're curious about UCB style game or just want some reps with grounded scenework, feel free to contact him! He has experience coaching Slackers, Spokanes, Monoscenes, LaRondes, or any form you want to work on. He has a bunch of exercises to help your team!

**His availability changes frequently so don't hesitate to contact him even if a time shows up as "busy."**